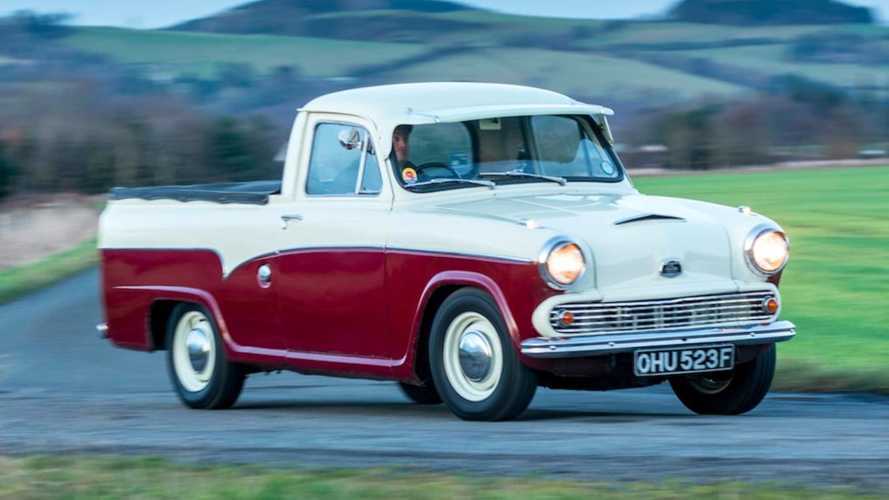 Thanks to its MGB GT powerplant, there’s more to this classic British commercial vehicle than meets the eye. Motorious ventures out for a test drive

When gazing upon Britain's Austin A55 Half-Ton Pick-up, the mind immediately conjures up black-and-white images of well-dressed individuals eating gruel, reading print-heavy newspapers, and enduring use of vehicles with all the accelerative properties of wind erosion.

With the nation still reeling from an all-out war effort and subsequent rationing, unless one had serious connections back in the 1950s – or serious money – the sole form of budget automotive enjoyment was the humble Austin Seven. Even then, the Seven was barely capable of 50mph, downhill with a following wind, and was about as comfortable on long gradients as George VI was with public speaking.

Why We Love The Jaguar XJ X308

We've Bought The 'Worst Car In The World' – An Austin Allegro!

If you were being sensible, one of your best showroom options – without selling the family silver – would have been the Austin Cambridge. Sold as the A40, A50, A55 and A60, the Cambridge summed up post-war Britain perfectly. It had a bread-and-butter image long before Alec Issigonis’s revolutionary Mini arrived on the scene, yet offered a shy effort at Americanised styling for a tiny injection of flair.

However, while practical and dependable, Austin's Cambridge remained the automotive equivalent of a lard sandwich on Mother’s Pride. It certainly never registered on the excitement scale. Early examples were lucky to coax 42bhp from their 1.2-litre straight-four pushrod B-series engine. Registering a nought to 60mph time required use of a sundial.

If you bought a Cambridge new in 1955, the 70mph motorway cruise was merely a pipe dream, while the stopping distance benchmark was cracked in around nine days. At 28mpg, it was far from the most economical car on the market, either.

Mechanically simple and wholeheartedly DIY friendly, you could forgive the underpowered, lethargic British design for being a product of its time – until you realise that Austin spat them out of their Longbridge plant well into the 1970s. Amazingly, you could still purchase a brand-new half-ton commercial variant when Roger Moore became 007. The rest of the automotive world had long since moved on.

With all that in mind, the example recently sold by Morris Leslie offers a surprise; the going in this Austin A55 Half-Ton Pick-up is anything but sluggish. That's because things have changed slightly in the half century since it was originally registered in the Bristol area on April 1, 1968.

Besides benefitting from the restyled front end, chrome side mouldings, and various interior refinements brought in for an October 1962 facelift, it now has enough poke to ensure driving in modern-day traffic doesn’t result in a mild panic attack.

This pick-up spent the majority of its working life as a bricklayer’s wagon, before being disposed of when wear-and-tear proved too much. At this point, the previous original owner managed to buy it back; he gave it a full-blown restoration, and sold it on again as a concours timewarp. Since then, the flatulent beating heart has been removed and replaced with MGB running gear and an upgraded clutch.

However, let’s not get ahead of ourselves; the MGB itself is not the quickest of cars. Venturing beyond a steady 100mph is virtually impossible in Abingdon’s finest – at least without driving out the back of an aeroplane.

Power delivery feels hesitant even in a solid B GT, the 1.8-litre B-series offering up its 95bhp as though drunk. Yet, the flow is transformed within the Austin Half-Ton (whose monocoque construction was termed ‘chassis-less’ in contemporary advertising). Transformed, that is, if you can get past the gearbox…

While an upgraded variant of the B-series motor rests on this example’s engine mounts, the transmission set-up is largely stock. This means, rather than sitting with a gearstick by your leg, you’re facing a column change.

The gearknob, and thus the marked location of each ratio, points towards the passenger, which makes crisp changes rather difficult without prior intimate knowledge of the pick-up. This is something to which the Austin’s vendor – Morris Leslie auctions – is accustomed. However, I’m not.

Parked facing a high metal fence, it takes me an embarrassingly long time to figure out where reverse gear is hiding; by which point I’ve resorted to pushing the vehicle backwards myself. Under the watchful eyes of the Morris Leslie crew, and through sheer luck, I manage to select first and set off with the grace of a concussed Kangaroo.

As I search for third ratio, I’m far from relaxed. I gingerly position the gearstick and slowly release the clutch, praying that I haven’t accidentally engaged reverse at 20mph. As if battling for second wasn’t stressful enough, by the time I eventually find third all momentum is lost.

Retreating back to second with sweaty palms and wide-open eyes, I gain speed as the first corner approaches; teeth clenched, I change up to third for the second time, just as the Austin reaches the apex.

I’m now bracing myself to find the only gear not yet explored, and as the shifter slides into fourth the darkness lifts and a calm falls over the cabin… until the first junction looms, ready to test my new-found gearbox skills, or rather the lack of them.

Timed from a standstill at the junction, I next attempt a ‘speed run’ to test the engine’s available grunt and my ability behind the wheel. The MG-powered A55 gathers pace with quiet confidence, gradually working beyond the cumbersome abilities of the original powerplant’s displacement.

Anything utilising the B-series was never destined to set the world on fire, especially when piloted by a column-shift virgin, but there is a vast improvement in throttle response over the standard set-up. Instead of extra noise and an impending sense of doom, there is noticeable acceleration and the speedo needle actually moves.

Now that I’m more familiar with the gearchange set-up, I can work through the healthy rev range to further push momentum. Omitting a turgid exhaust burble between ratios, the pick-up reaches 60mph from the junction in little under 27 seconds – finally, we’ve found an A55 that goes faster than walking pace.

Meanwhile, the handling remains typical for this model. The pick-up can be thrown into the bends with far more tenacity than its shape would suggest. There is considerable lean as I press on, and I can detect the tyres scrabbling until the corner straightens out, but I never feel out of control.

The healthy steering feedback allows detection of the slightest road undulation, and the thin wheel offers a stern grip on proceedings. The tight, direct response permits the little Austin’s nose to follow the intended driving line, free from protest or kickback.

While those of a Ferrari persuasion would sneer at the figures on paper, the engine transplanter’s attention to mechanical detail, by keeping power low, is actually a stroke of genius. They avoided the temptation of boring out the engine and surgically attaching tuned components – not just for reasons of economy, but also of safety.

The pick-up’s frame can only take so much before cornering would move beyond wobbly and more towards a rollover Lassie would be proud of. The extra grunt has been tuned in respect to the car’s ability, and the amount of fun that can therefore be had is remarkable.

Even when the Austin has more to give, I constantly feel on the edge, slinging its dinky frame around with gusto. There is a danger, though; one has to know one’s limit. While the car is unlikely to premeditate your demise a la Porsche or Lamborghini, you can still get yourself into trouble.

This is something I find out when careering around a tight left-hand bend, as the driver’s door peels itself open and nearly casts me out into the dense Scottish undergrowth. Purely my fault for not checking the lock was in place, but enough to pump the adrenaline through my system like a bolt of lightning.

Ride comfort even at the national speed limit – or when clinging to the dashboard for dear life – is remarkably comfortable. You would expect the suspension to clank and moan like scaffolding, but you’d be wrong. The vinyl seats also provide ample support, while the tight cabin space adds a dollop of cosiness to the proceedings.

Meanwhile, the brakes are well enough sorted to ensure I'm not thrown about like a pinball during emergency stops; with a sturdy dashboard capable of mashing my face to a pulp, this is a godsend.

There is only one criticism of the humble Austin – and it’s a purely personal one. The A55’s road stance appears too awkward. It has an uncomfortable air as I drive along, with tiny wheels on what feels like an American tribute act. The styling is far from bold, but there is something desperate lurking underneath.

It’s trying to imitate larger stateside contemporaries, but isn’t quite brave enough to go the full whack. Far from the brashness of the Ford F100 or Chevrolet Apache, as a hybrid of British restraint and all-out USA, this A55 strikes the perfect balance for UK roads – yet you can’t help but feel you’re getting a karaoke version of what could have been.

The sunvisor above the windscreen serves a purpose, yet the Austin emerges as a junior, baseball cap-wearing incarnation of the American spirit Brits so desperately tried to capture during the 1950s.

The truck therefore doesn’t feel as British as its saloon stablemate, taking away just enough original charm as to become noticeable after only a short journey. Akin to installing the Stars and Stripes and a flashing jukebox in a quintessential British pub, the lure of both cultures is slightly lost on each other.

Nonetheless, with an improved powertrain and its sheer practicality, this 1968 Austin A55 Half-Ton Pick-up is the perfect classic. As an introduction to the world of column shifting, it’s also the ideal oldie on which to stick L-plates and become intoxicated with the charisma of bygone engineering.

Back at the Morris Leslie HQ, the utter clown who’d left the storage facility unable to find reverse returns a triumphant and smitten man. What began as a terrifying jaunt into the unknown has become a pleasant experience beyond all expectations.

The more I absorb the pick-up’s looks, the more I want to take back my initial thoughts on road stance and styling. This Austin is a handsome vehicle, and the contemporary usability afforded by the period-perfect pop-clip rear cover is the icing on the cake.