These Affordable Luxury Classics Will Improve Your Life 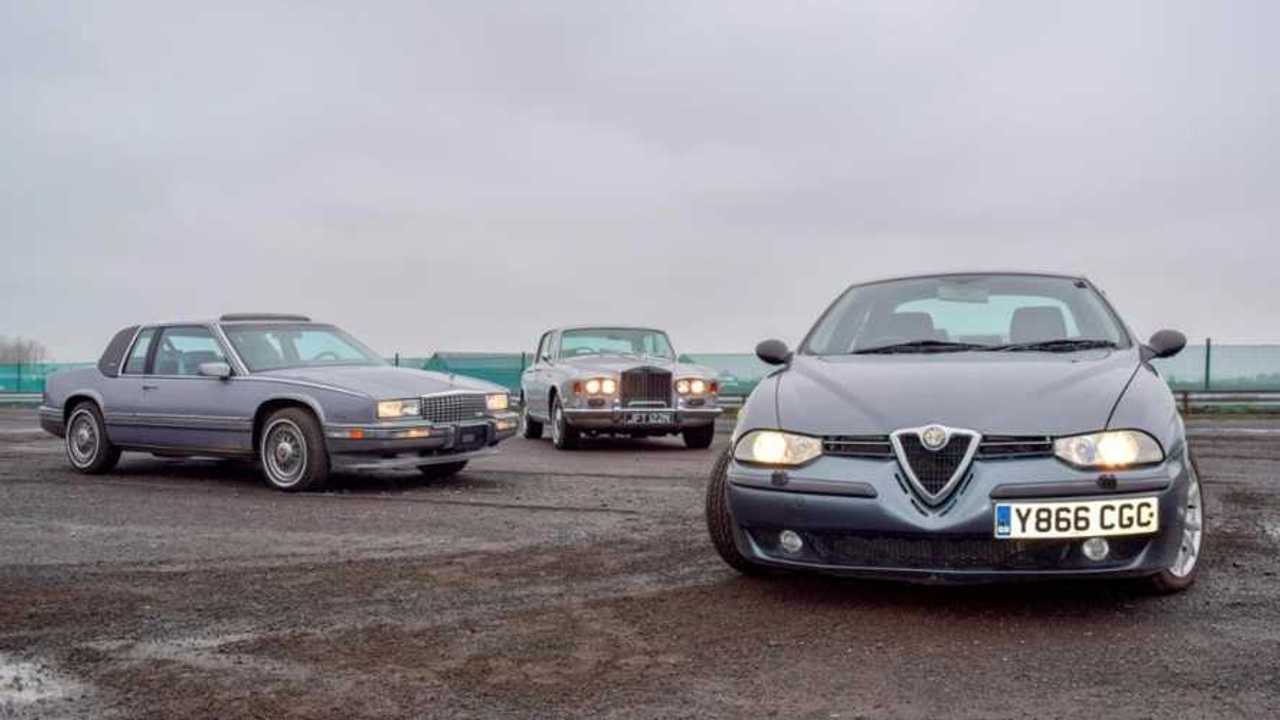 Economics can be cruel and misleading. In a modern world, the very word ‘economics’ leaps into our conscious thought at every given opportunity. It steers virtually every element of our world, from how much we owe, to what we can afford to eat, wear and – most importantly to social climbers – drive. It’s enough to make one reach for the nearest set of classic car keys and drive towards the mountains; seeking sanity.

However, regardless of whether you’ve felt the urge to speed away from the global economic narrative and into a rose-tinted world of yesteryear, we remain ruled by our bank account. Headlines are awash with insane prices being met for vehicles that, a decade ago, changed hands for practically nothing at all. Even those of us whom turn to the world of classic cars for escape feel suffocated when seeking a fresh automotive counterpart.

Why The Range Rover P38a Deserves Space In Your Garage

However, there is a glimmer of hope and from where we’re standing, it mostly glints in silver. Dominating Morris Leslie’s auction warehouse, a 1991 Cadillac Eldorado Biarritz, 1975 Rolls-Royce Silver Shadow and 2001 Alfa Romeo 156 radiate across the forecourt like a bomb blast.

They may come from three different decades and represent three motoring marques from the US, the UK and Italy respectively, but they share the same mantra: luxury and performance. More than that, they offer social status far above their current price bracket. However, dare you brave taking one on for a smidgen of what they cost when new?

If it weren’t for self-restraint when watching inflation balloon to unbalanced proportions, I think we’d go mad. Proper 'angry mad' like Sharon Stone in Casino - ramming her Mercedes-Benz into Robert De Niro’s Cadillac Eldorado Biarritz over and over again. It’s hard to watch. We imagine that said Eldorado Biarritz was only on the driveway as a result of enormous business success in Las Vegas, for any Cadillac is the perfect example of no-compromise American luxury.

Evolving through ten model generations, the Eldorado delivered indulgence, at hefty cost, over five decades of production. It’s unwise to expect anything other than continuous cash consumption from a car whose name translates from Spanish into ‘the gilded one’, boasting an almighty American V8 up front.

In 1957, the Eldorado Biarritz cost $13,074 more than a Series 62 Eldorado, and even exceeded the asking figure for a Rolls-Royce Silver Cloud. Knowing that, we proceed towards the door handle with caution.

This 1991 Cadillac is a fine example of the ninth generation Eldorado Biarritz and now she sits almost as low as her modern-day asking price. Clearly, something has dramatically dented this Cadillac’s positioning in the classic market. Perhaps if I consulted the opening scene of Casino, I might in part have the answer as Robert De Niro turns the key in the ignition and his beloved Eldorado Biarritz blows up spectacularly.

As it turns out, that’s a film special reserved for wealthy casino owners, but the Eldorado Biarritz did blow-up in other ways with its real-life and often disgruntled clientele.

It was the eighth generation that handed out the most grief – the engines had a tendency to spit out connecting rods, bearings and various other internal components. Dealers had to disable the electronic systems controlling fuel flow. If they didn’t, the cylinders became deactivated or the engine flooded and physically exploded.

Cadillac’s reputation took a severe punch on the nose and sales plummeted in tandem. By the time the ninth generation made it to the US showrooms, there were visible wounds to Cadillac’s integrity and the new model had a lot of healing to do.

Climbing inside this silver Eldorado Biarritz, there’s a digital speedometer with glowing green numerals ahead, complemented by another screen that relays the mpg. Various controls are dotted around the driver with slick silver dials encased in wooden veneer. It’s not as luxurious in here as expected given the model’s expensive reputation, but you cannot complain about comfort.

The vehicle shifts with tenacity, too; thanks to the 4.9-litre V8 featuring port fuel injection. When you plant the throttle, Cadillac’s generous bonnet rises skyward as the rear squats down to dramatic effect. It doesn’t strike as the most efficient acceleration ever experienced, but the engine note causes an infectious ear-to-ear grin.

There’s redeveloped suspension underneath soaking up the road’s imperfections and should the need arise to come to a sudden halt, anti-lock brakes await command to reel in all those horses.

‘We’ve made it better’ Cadillac trumpeted, and they were probably right. However, not only did potential Cadillac customers have to believe them, they also had to fork out a substantial sum to discover if claims were true. The poor sales that followed suggested it was a leap of faith too far for most.

The reputational woes that would have afflicted this Eldorado Biarritz when new have now witnessed it join the lower estimate brackets when it comes to values today - a pity for a vehicle that has some genuinely delightful design touches. It makes you feel special, too – as though living in a re-run of Dallas.

By far the most sumptuous representation of global refinement comes from the 1975 Rolls-Royce Silver Shadow, which stands unperturbed by an asking price that may just allow a mere mortal to attain it.

You promptly detect fine craftsmanship in even the sound each sturdy door makes. Well aware that we represent a commoner sitting on the most comfortable seats ever experienced, knowing that this Roller costs less than a new Ford Mondeo feels dirty.

There is little notion to state that the engine has fired until moving scenery beyond each chrome-lined window suggests movement is underway. The enchanted Spirit of Ecstasy glides through the air on her distant bonnet mounting ahead, with cabin grandeur oozing into the real world.

We’ve driven only for a few miles and yet already feel soothed, unburdened and renewed. All economic concern can remain quite frankly elsewhere, for nothing alludes a feeling of safety more than the Silver Shadow’s cocooned interior.

Gathering speed, the engine doesn’t scream nor holler. It seems the opulent barge does not require much attention to complete each road undulation in exemplary style. With ease, you can imagine travelling to an important engagement somewhere, perhaps with a swimming pool in Keith Moon’s back yard.

Thoughts pass concerning ownership of such a Silver Shadow. The letters that would come through the door would no longer be final reminders for electricity bills, but instead gracious requests for our company at the nearest high-end garage. How many marques can boast of such credentials whilst convincing the average joe they are precious cargo whilst aboard?

Perhaps the previous owner has used too much leather conditioner in here for, as we continue to make progress, strange conclusions begin to aggregate in our mind. Going on limited knowledge of the boom and bust dynamics of classic values, we assume the Silver Shadow has fallen dramatically into the price trough as the lucrative badge puts people off. However, that's not strictly true.

Older Rolls-Royces, such as this 43-year old example, have suffered a financial fall from grace and consequently come with a price tag that allows almost anyone to take one on. In time, Silver Shadows will eventually become rare enough for values to increase, so does it make sense for an ‘average someone’ to buy a Rolls-Royce while the window of opportunity is briefly open?

The majority of people who count pennies carefully would argue a definitive no. However, they’re not sitting in the cabin of a Silver Shadow; and it fuels a feeling that you could take on the world, even with limited funds.

Perhaps regardless of personal economics, we should grant ourselves some special things to enjoy in life. We only live once, so why not make it a good one? Arriving upon any destination ready to strive for bigger and better things could only result in progress. The scenery is no longer blurred outside. We have arrived, back where we started, and the door opens.

‘Nah, that’s probably just a silly idea’ the photographer mutters as the real world happily drags us back in. However, the Rolls-Royce commands a second look, after all ‘quality remains when the price is long forgotten’.

Successfully snaring affections with a smouldering look, glaring more intently than any perfume model, is the 2001 Alfa Romeo 156. The Italian saloon holds the lowest estimate of the three but there’s no denying that it oozes ‘something else’.

For those of you with a wicked sense of humour, insert a cheeky quip about a puddle of oil or a direct route to financial suicide simply because she is an Alfa here. Meanwhile we’ll stand and admire charisma perfectly encapsulated in automotive architecture.

As soon as the dashboard dominates the eye line upon landing in the driver’s seat, there an overwhelming feeling of Alfa’s merit. The 2.5 V6 ahead cranks into life and expressive acoustics offers exchange for ignition.

The sound instantly motivates the mantra to get underway. The manual transmission snaps from one change to another with a deeply primal grunt, while a sharp throttle response lurks somewhere beneath your right-foot, awaiting any form of movement to unleash everything its got. This 156 clearly carries her sporting pedigree with pride. It doesn’t take long for it to get under your skin.

As each junction, roundabout and stretch of open road passes, there’s a slow-burning appreciation for how the interior boasts a fusion of sporting design cues, elegant lines and luxurious materials - a combination you won’t find elsewhere with restricted finance.

Where we have encountered vehicles primarily known for their ability to provide a stimulating driving experience, unless it’s a perfect road, suspension is unsympathetic to the comfort of those inside. Where we have enjoyed refinement and restfulness, we’ve usually dismayed at the turning circle and lack of willing when pushing for a little extra.

In the rare circumstances where a pleasing concurrence of agility, speed and extravagance has occurred, mortals are most usually priced out of the market. However, inside this Alfa Romeo that sits perfectly within fiscal reach, it seems we can have it all. Or can we? The words ‘too good to be true’ pop annoyingly to mind.

There is more than one good reason why, as the 156 verges into becoming a classic, this Alfa can be acquired for pennies. Amongst the lengthy list of maladies potentially waiting to befall you are premature timing belt and water pump failure, sills and floorpans prone to enjoying the company of rust, suspension bushes that need replaced when you play rough and cabin electronics with a mind of their own.

Clearly a partnership with a 156 requires more than a degree of tolerance but aren’t the more challenging aspects in life those that deliver all the more satisfaction? Yes, life with an Alfa Romeo comes with an element of risk but in return you will feel incredibly stimulated when behind the wheel. If you like not being bored, this is the aspiring classic for you.

Perhaps if you were to seek out elegant evening wear and speed off into the night with this Alfa, the 156 could help you forget your financial woes in the first place. At least until the next MoT comes up.