Is This MK1 Honda Civic The Genesis Of Modern Reliability? 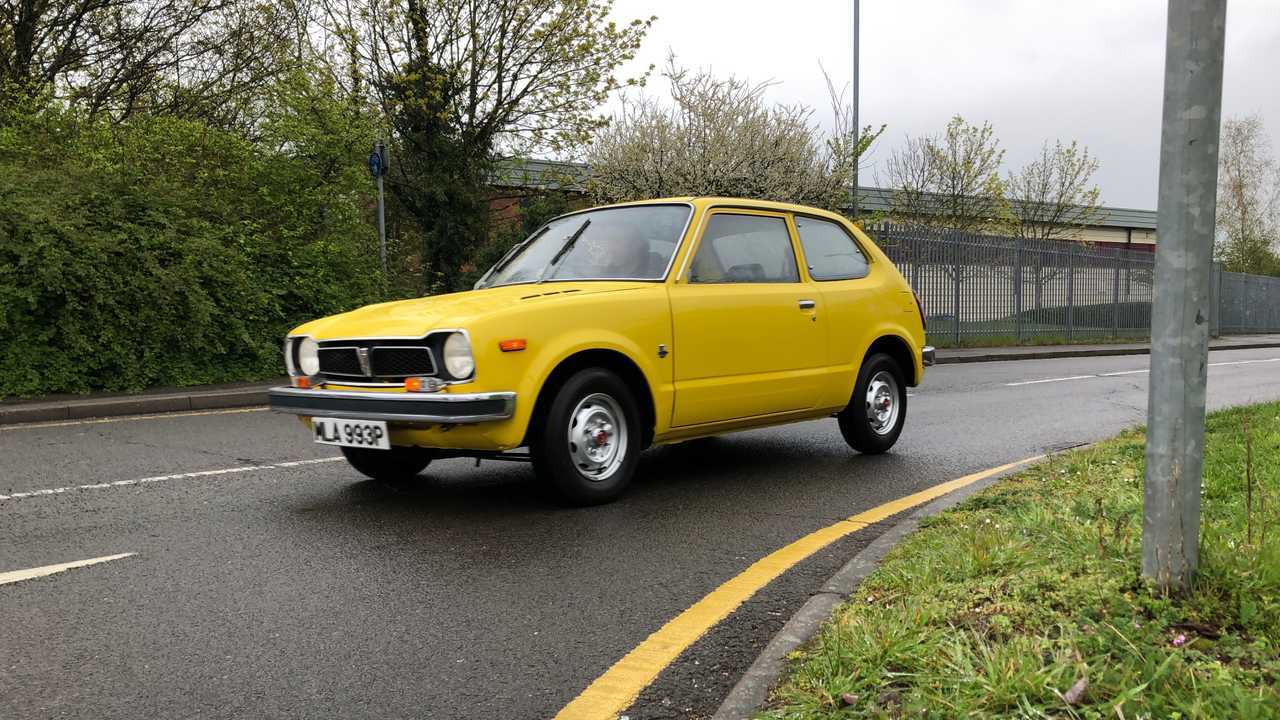 Turning back the clock to 1975, Britain was in turmoil. Jenson made two-thirds of its employees redundant amidst the realisation that oil was now a dirty word, one million people were unemployed courtesy of the Labour Government, and the British film industry was on its knees. We even had an EU membership referendum. Imagine such a thing.

Step upon the driveways of the time and you’d find a whole host of now-forgotten cars, but, unlike today, they were all quintessentially British. With inflation sat at the highest rate since 1800, the world was a very different animal to the one we are currently presented with. There were very few Hondas in sight. Well, not quite yet...

Does This Private Honda Collection Beat Honda’s Own?

This Honda NX250 Is The Adventure Bike You've Been Looking For

Aside from the unwavering hope still kicking after the conclusion of World War Two, the car industry’s international competitors were nowhere to be seen. British Motor Corporation (BMC) was still enjoying the accolade that five of the 'top ten best selling cars' came from their wheezy empire; filled with ashtrays and brown leather chesterfields.

Enter the Honda Civic. In the 1970s, most people were blissfully unaware of most foreign vehicles and the benefits they could bring. Yet, for those who knew about vehicles beyond the realms of Britannia, they typically flipped the bird in their direction. 'Because British is best.' Sadly for these individuals, they would have saved some precious pennies had they overcome their fear of globalisation; because in the case of Honda, they absolutely nailed it.

Perhaps the irony hasn’t been misplaced, considering Honda has been based in Britain for some time now. Since the Swindon plant was established in the 1980s (in a similar way to Nissan), well over a million cars have been produced. Many of which are Civics, that have built upon the successes of this Carnaby Yellow example. The same vehicle that featured in brochures across the country.

Gleaming as though factory fresh, this 1975 Mk1 Civic gives some odd first impressions. I try to conjure images of its competition from back in the mid-seventies, and cars like the Vauxhall Chevette, a Mini or an Austin Allegro surface. The Chevette front end was inspired by the Pontiac Trans Am and the Allegro was just, well, an Allegro doing its own thing.

The Civic’s design appears neither avant-garde nor bland; it somehow sits in the upper median of that spectrum without forcing an opinion in either direction. I quite like it. Reach for the classical chrome door handle and the levels of quality you’re about to experience becomes all too apparent.

The type of movement and satisfying click that you usually associated with a Jaguar, not a Mini. The slogan “It will get you where you’re going” certainly seems fitting from the original press release.

Peer inside and the shock factor grows further. At 44 years old it looks almost too good, like a weird blend of modern day quality expectations wrapped up in a seventies nostalgia. The craftsmanship of everything is obvious to the point of marvel.

The instruments are simple but undeniably classy. The traditional, if not old fashioned, wood stripping over the dashboard somehow looks elegant and fashionable, unlike the British derived slabs we became used to during the era. Even the switchgear feels precise and mechanical unlike various Fords of the time.

A true city car for the people who had career aspirations beyond their current means, yet wanted to demonstrate their impeccable taste. The few rare types who weren’t keen on the assumption that breaking down was a prerequisite of car ownership.

Fire up the little 1.2 Deluxe and further tsunamis of shock batter you. Even at idle, the noise is unobtrusive, smooth and gentle. Not even the trim is showing any signs of age or movement. The vinyl and cloth seats swallow you with a sponginess that, fortunately, has been forgotten in the sands of time, yet it remains comfier than its rivals.

At 6ft 4” I struggle with many classics; peering over the windshield of an XKE doesn’t create the same ideas of abject cool that one dreamt about. Getting into a Mini requires some solid Twister rehearsals and results in having to recline the seat so far you could be mistaken for a stoner. The Honda Civic? Perfection.

Without so much as a hair brushing the vinyl roof lining, it was clear that ergonomics remained a well-understood concept in Japan. Meanwhile in Britain, designers were likely arguing over whether a Garibaldi biscuit was better than a Custard Cream, whilst enjoying their 30th cigarette of the morning.

With the seat settled into my chosen position and the singular wing mirror adjusted, the clutch was depressed and first gear selected. The biggest difficulty of this transaction was deciphering whether the worn notions of each operation were down to 72,000 miles on the clock, or whether this was a character trait of the model when new. Unlike other classic cars under my control, the slightly slack feel of the driving controls didn’t inhibit my impressions. Instead, a sense of ruggedness awashed the senses.

Having owned several starship-mileage vehicles of the early noughties, in contrast, this little Honda fares better than my modern vehicles. Perhaps more unusual was how driving the Civic smoothly became second nature so quickly, something that perhaps cannot be said for equivalent classics of the era, with each brandishing their own set of quirks that make them unique, and sometimes tricky to master.

The gearshift offers slushy satisfaction and a pleasing click once you’ve found each ratio, whilst reverse averts any crunch despite its straight cut configuration. Once on the move, the steering was perhaps the biggest surprise. Navigating a sweeping curve results in far more lock than one would expect this side of a Willys Jeep, yet provides little feedback despite its tiny dimensions and independent suspension.

Whilst navigating some country roads, a few sharp turns result in novel views of the road for either passenger or driver, with the anorexic tires doing what they could to appease my vigour. This is not a car that you can chuck into bends and receive a sense of aspiration for the next, an oddity given most cars of this segment and era provide the opposite reaction.

Driving a Mk1 Civic is like driving a Camry. Yes, you can turn up Pink Floyd without much volume to drown the engine out, and yes, you can use David Gilmour’s gravelly tones to punish the accelerator, but the result? A flat line from the Vitals Signs Monitor. This is a car you pootle around in, but is at such a level of quality it would quite happily go anywhere you point it.

Although this may sound like a detraction from the car, or that I’m using overly complex sentences to simply say it’s ‘boring’, that would also be inaccurate. There is something truly beguiling about driving a car you’ve never tried before that is nearly double your age, whereby within seconds you would trust it to the ends of the earth. You would even look cool doing it.

Approaching a hill with my colleague sat next to me, we chortle as I arrogantly attempt to overtake a truck from 30 miles per hour, almost guaranteeing the little 1.2 will want to drop a ratio or run out of puff. Yet the moment never comes, with acceleration slightly delayed but speed continuing to rise in a smooth nonchalant manner. It’s a drivetrain that, in any scenario, doesn’t feel fast, yet provides torque in the moments you require it.

The large bakelite steering wheel shows some wear in the rack, yet even at low speeds is surprisingly light for a non-power assisted unit. The turning circle is also mightily impressive, yet the lock is on the verge of annoyance; allowing you to fulfil any truck driving ambitions without the expensive of an additional licence.

The overriding feeling of reliability and sturdiness swamps the senses, and creates a problem when I eventually enter the next classic car. Never have I sat in something of this age and been bombarded with notions of modern conclusions, whilst also being very aware of its actual age.

The first generation Civic is the perfect tonic for those who watch Suits and then immediately want to become a New York lawyer, because of the risible levels of decadence and deceit. Viewers think this is the only career path to follow, with Armani suits littering the Upper East Side and Ferrari Daytona’s as company vehicles.

Yet, for those who actually enjoy this career on a daily basis, they realise it’s laughably inaccurate. Albeit those inaccuracies don’t detract from the satisfaction of your own law career, it’s just different. This is the Mk1 Civic; you wouldn’t know the joys it can bring to the table unless you’ve tried one, but your assumptions would perhaps conclude it’s kudos swamps the reality. Try one, it’s just different.

Despite the rollercoaster of feelings and rewritten assumptions about the Mk1 Civic, I came away having the utmost respect for a company I rarely find myself researching. This little car told the world how to approach the fundamentals of design and engineering. Aspects that find modern drivers sticking seven figures onto the odometer, even in cars as small as this one.

For enthusiasts today, however, it stands as a landmark. It may not be fast, it may not be ‘exciting’, but it’s classic, it’s sophisticated and – in many ways – simply cool.

This 2004 Honda S2000 Is What Driving Enthusiasts Crave

Is Senna’s NSX Type-R Legacy The Finest JDM Car Ever Made?