This is why we love the Mazda RX-7 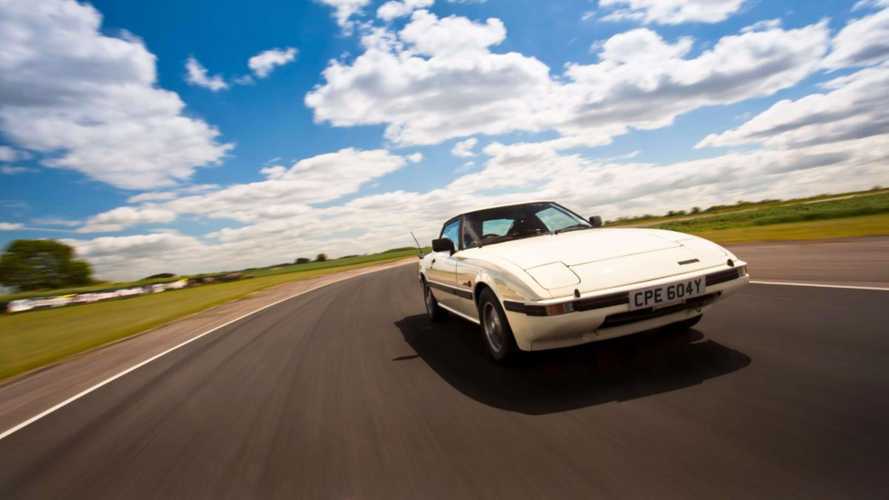 Unleashing rotary power’s raw potential, there’s more to the RX-7 than mechanical prowess. Here on film is why we adore the Mazda that dared to be different

However, things weren’t rockin’ in the automotive world. America was shaken by the Ford Pinto scandal, whereas Britain’s car-production efforts were unquestionably dangerous, at best. The 1970s proved a turning point towards unrivalled Japanese automotive dominance, and nothing sums all that up better than the utterly unconventional Mazda RX-7.

While 1978 will forever be known as the debut year for George Lucas’ Star Wars, Mazda presented real-life sci-fi design with its all-new rotary engine. Besides demonstrating the manufacturer’s capacity to think outside the box, the RX-7 played a vital role in establishing the marque’s reputation for building celebrated drivers’ cars.

Besides the hazards of open-necked satin shirts and space hoppers, the 1970s presented car makers with the grim reality of a global fuel crisis. Soaring petrol prices saw customers shun large, gas-guzzling V8 cruisers. Even Jaguar’s renowned E-type and its XJ-S successor suffered. Although the automotive giants refused to admit it, a new approach was needed.

While board rooms and think tanks rotated in never-ending circles, Mazda took action. The sharpest minds from within the company set about creating a fresh angle on sports driving; the new model had to be smaller, lighter, more efficient yet pumped full of charisma and excitement. Most importantly of all, it had to ooze enjoyment from behind the wheel. This was one hell of a brief.

However, the engineers and designers rose to the challenge, and Mazda unveiled the truly ground-breaking RX-7 without protest. The revolutionary rotary engine offered power alongside mechanical curiosity, and was mounted further back in the car’s frame than a conventional engine in order to provide unrivalled handling.

Setting new standards in road holding, the formula proved a hit with clientele and critics alike. So much so, that Car and Driver, one of America’s most influential car magazines, slotted the RX-7 within its annual ‘Top Best’ listings – five times!

Selling in numbers alien to those within the outdated confines of British Leyland and General Motors, more than 470,000 examples were snapped up from Mazda forecourts before the second-generation FC model was introduced in 1985. Naturally for its era, that next-gen RX-7 employed turbo power for an added danger factor.

The third-generation FD model landed for 1992, and production of the RX-7 ended in 2002 – although official UK sales stopped in 1996. And while lesser rivals have been banished to the annexes of history, the RX-7 has enjoyed global recognition, to the point where we are celebrating four decades with a rather special video.

A raging ambition in motorsport further enhanced the RX-7’s celebrated image. The car took overall victory in the 1981 Spa 24-hours, competed at Le Mans and thundered through destructive Group B rallying courses around the globe. To top off this impressive CV, the RX-7 also claimed the 1980 and 1981 BTCC titles.

Across the pond, the RX-7 took an unmatched 100 wins in 12 years of IMSA competition, and won the GTU class at the 1979 Daytona 24-hours, helping cement Mazda’s market share in the illustrious United States of America.

Win Percy, the British racing driver who took both of the RX-7’s BTCC championships, was blown away by the Mazda’s speed. ‘I won the title in 1980, and team owner Tom Walkinshaw said: “Let’s go for it and try to win races outright next year!” We duly did, beating the Rovers and Capris, and I took the title again. It was a very capable little car – you really could call it a giant killer.’

Pierre Dieudonné, who drove an RX-7 to victory in the 1981 Spa 24-hours, explained: ‘That win was very important to Mazda. It was the first time a Japanese car manufacturer had won that race – the RX-7 didn’t have the image of something like a Porsche. But winning at Spa gave it the prestige.’

Why we love the Mazda RX-7

Just under 812,000 examples of the RX-7 were manufactured, and while some critics lament its early reliability – including its capacity to burn oil and a host of teething problems – the impression left by the model measures well beyond mere sales figures.

Feared by on-track rivals, adored by millions and admired by those of a mechanical forte, the RX-7 established Mazda as a brand with sporting pedigree. Besides launching the rotary engine into the mainstream public domain, perhaps its biggest achievement will remain laying the groundwork for Mazda’s greatest icon; the MX-5.

Today, the RX-7’s spirit is in rude health. It resonates with Mazda’s current SKYACTIV range, while original examples of the model continue to grace the classic car scene and thrill newbies into scouring the classifieds.

We genuinely mean what we say in that the RX-7 rocked the boat, proving that you could lead with philosophy rather than deep-rutted antiquity. After 40 years, its stance as one of the most innovative and unique sports cars of the 20th century remains untouched.