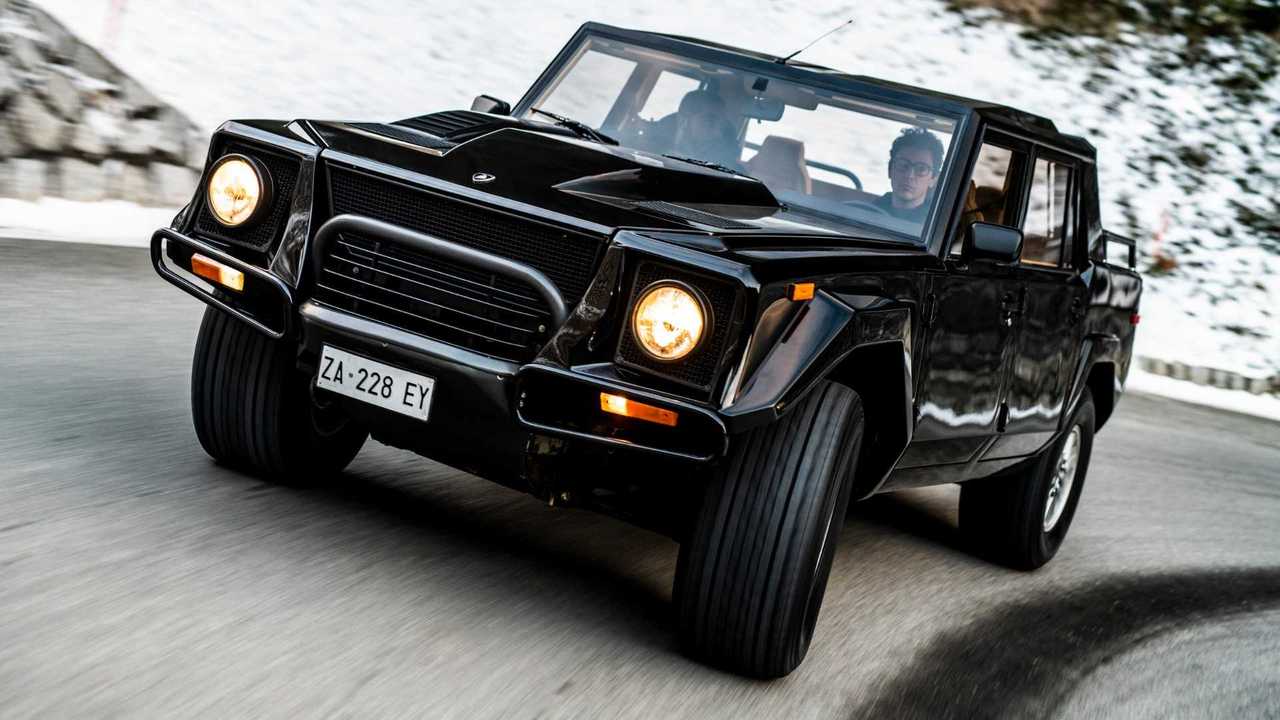 Simply one of the most outrageous vehicles ever made, the Lamborghini LM002 was the world's first super SUV.

The temperature is in the negative figures, the usually blue Braies Lake is frozen and icy white, and the landscape that surrounds it is dusted with snow. The Italian Mountains make for a truly cinematic backdrop during winter, but the jagged cliffs, forged by the brute force of Mother Nature, were about to be upstaged by something else just as dramatic. Like a scene from an apocalypse movie, a Lamborghini LM002 rumbled out of the wilderness and presented itself at the foot of the lake.

The black straight edges of the 4x4 contrast the natural white canvas behind it, cutting a bold silhouette into the surrounding landscape. There’s nothing subtle or elegant about the design of the LM002, nor should there be as its purposeful stance stems from a stillborn military project from the 1970s. Blunt, purposeful, utilitarian. This Lamborghini is a far cry from its Countach sibling that was sold alongside it. Or is it?

Despite this car’s heavy-duty all-wheel-drive, enormously high profile tires, and short overhangs that enable it to traverse just about any terrain, you won’t find a traditional diesel engine under the hood, oh no. This being a flamboyant product of Italy means that it actually possesses the same 5.2-liter V12 from the Countach supercar. That is both fantastic and bonkers at the same time!

Juxtapositions are what define the LM002 with the interior greatly contrasting the ‘form-follows-function’ exterior. This example has been returned to 'as-new' condition by Lamborghini’s in-house restoration service, Polo Storica, and is full of high-quality leather and opulent wood trim. It certainly feels like a luxurious means to travel, and well appointed to satisfy its original target market of the Middle East.

Despite this vehicle’s vast size, there isn’t as much space inside as you’d expect. A large console divides the four individual seats that are almost relegated to the far corners of the cabin. There’s also a whole host of ergonomic quirks that seem traditional on exotic Italian vehicles of this era. The steering wheel obscures the ignition, its windscreen wipers only clear half of the driver’s vision, and the centrally mounted dogleg gearstick can be a stretch to put into 4th-gear. Despite these shortcomings, and clearly being a product of its time, you can’t help but feel that this cabin is a special place to be.

Hitting the well prepared and relatively snow-free Tarmac, you have a great feeling of dominion driving the LM002. There you are sitting high above everything else in, what is for all intents and purposes, a V12 tank. The sense of invulnerability it gives you is utterly empowering, and also mildly hilarious when local road users suddenly realize that tooting their horn at you might not be the best course of action.

The LM’s gloriously 12-cylinder engine puts out 444-horsepower, but don’t expect it to go anywhere quickly. While it has the power of a 1970s supercar, it also weighs in at over three-tons, and so 0-60 mph is delivered in a leisurely 8 seconds. Putting your foot down might not get you anywhere quickly, but the orchestral song of that V12, followed by the pops of unburned fuel, when you lift off will bring a smile to your face guaranteed.

At low speeds, the LM002 feels as cumbersome as you might expect. A usual three-point maneuver often turns into six, while the entire village comes to spectate the moron who parked on the wrong side of the gas pump. Speaking of gas, this Lamborghini returns just six miles per gallon, if it’s on its best behavior. Even more shocking is that when in low-range on a snowy surface it will burn 1-liter of fuel for every 800 meters covered!

Get the car up to speed, and you’ll find it to be surprisingly competent for its size and weight. Yes, those tires do result in a substantial delay between inputs from the wheel, and outputs from the vehicle, but learn its nuances and you can be pretty accurate about where it’s placed on the road. The LM002 also doesn’t lean through prolonged bends as much as you might think for a 4x4 of this height and weight.

Like a husky pulling at its lead, you can feel the strength of that V12 after every highly mechanical gearshift. It’s very much a vehicle that comes alive the faster it’s driven, however, it’s wise to exercise some caution as the brakes certainly leave something to be desired.

Its on road manners are largely dictated by its uncompromising quest to climb every mountain. Incase its visuals left you in any doubt, this is a proper off-roader that’s equipped accordingly. Things such as bespoke run-flat Pirelli Scorpion tires were developed for the Lamborghini, and even offered in a special tread pattern for sand. It also hosts huge radiators to keep the V12 cool when climbing terrain at low speeds, hardy suspension, selectable all-wheel drive, and three locking differentials. No wonder it became known as the Rambo Lambo.

A Lamborghini LM002 is a totally outrageous vehicle in every sense. Objectively speaking, it’s a questionable road car, conceived from some of the least logical components for a 4x4 known to man. However, as an emotional experience on four wheels, it’s hard to think of something this provocative or unique. The fact that it even exists boggles the mind, but we’re sure glad that it does. It will be forever remembered as the most bonkers creation to leave Sant’Agata.